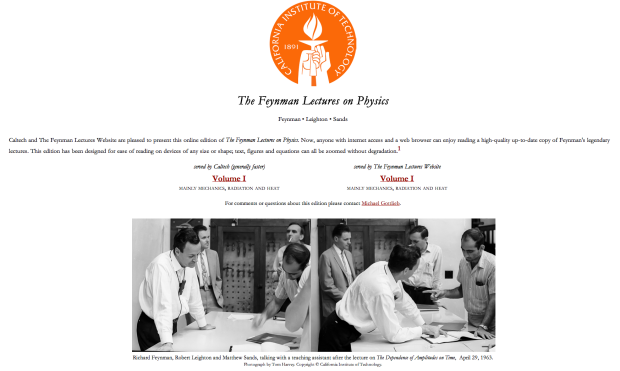 I started out in life as a physicist (in particle physics to be precise).  In hindsight, I was very lucky to be doing research during an extraordinarily productive period (see here and here) – it was an exciting time!

One aspect of this was helping give undergraduate courses as well as taking problem sessions. Courses usually had a standard textbook to go with them, and there was a good selection. At the same time, there was also the famous Feynman Lectures on Physics (FLP) which were a very individualistic take on broadly the same material.

Rather remarkably, the first volume of the Feynman lectures is now available free online with the other two volumes in preparation. They’ve done a really excellent job, it’s worth taking a look, even if there’s only a passing interest. There’s some interesting background on the development of the online version here, including:

Mike Gottlieb has now devoted 13 years of his life to enhancing FLP and bringing the lectures to a broader audience, receiving little monetary compensation. I asked him yesterday about his motivation, and his answer surprised me somewhat. Mike wants to be able to look back at his life feeling that he has made a bigger contribution to the world than merely writing code and making money.

Finally, it’s revealing to read Feynman’s preface to these lectures (written in 1963):

I think, however, that there isn’t any solution to this problem of education other than to realize that the best teaching can be done only when there is a direct individual relationship between a student and a good teacher—a situation in which the student discusses the ideas, thinks about the things, and talks about the things. It’s impossible to learn very much by simply sitting in a lecture, or even by simply doing problems that are assigned. But in our modern times we have so many students to teach that we have to try to find some substitute for the ideal. Perhaps my lectures can make some contribution. Perhaps in some small place where there are individual teachers and students, they may get some inspiration or some ideas from the lectures. Perhaps they will have fun thinking them through—or going on to develop some of the ideas further.

The above lectures are at an undergraduate level and some are quite advanced. If you’re interested in his lectures at a more general level, take a look instead at the his Messenger Lectures or else the videos produced by Christopher Sykes.

Feynman was quite a remarkable man and it’s very impressive that his legacy lives on in so many ways.

View all posts by David Pottinger